Robotic surgery for cancer esophagus is called robotic esophagectomy, which involves removing the food pipe which extends from mouth to stomach. With small incisions, the thoracic and abdominal part of the esophagus is completely mobilized, hence robotic-assisted surgery is now a common treatment modality for oesophageal cancer. It is associated with quick recovery and less pain compared to open surgery which is done via large incisions. The use of surgical robotic systems has many advantages over thoraco-laparoscopy for oesophagectomy. Robotic surgery provides high definition three-dimensional vision, better magnification, improved dexterity of instruments with better range of motion and hence lesser complications during the surgery which involves mobilization of the food pipe in the mediastinum, thorax and abdomen. 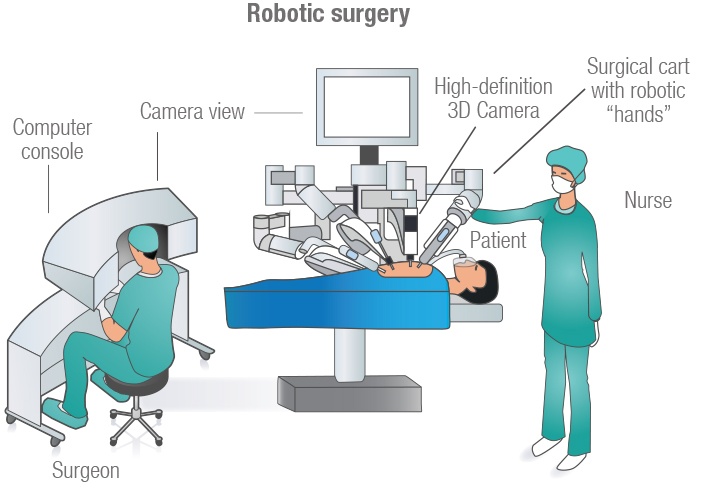 Dr. Chinnababu, a minimally invasive and robotic surgical oncologist, utilizes the latest robotic technology for oesophagectomy at the Apollo hospitals. This technique involves mobilization of the esophagus, stomach followed by the creation of a new food pipe called conduit with suturing in the thorax called anastomosis. It can be supplemented with laparoscopic and thoracic approaches.

The robotic abdominal surgery involves placing tiny 8mm incisions via which ports are placed below the lowest rib margins called subcostal areas. Above the navel area called a supraumbilical incision, a camera is placed and an assistant port is placed on the right side of the abdomen called the paramedian location. Additional ports may be placed on the left side of the abdomen and below rib margins. The feeding tube into the small bowel called Feeding jejunostomy is brought out through one of the port sites on left to minimize the number of incisions.